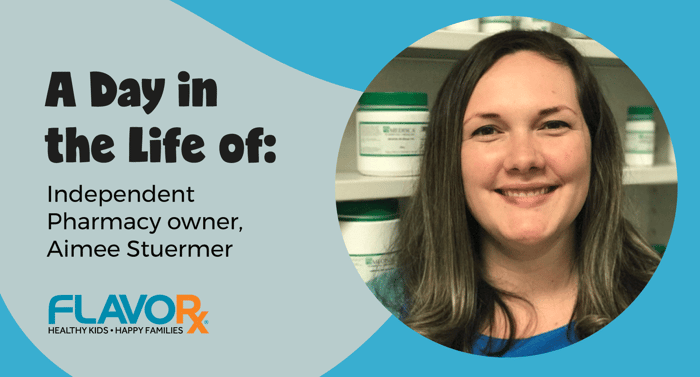 American Pharmacists Month is a time to recognize pharmacists’ contributions to health care and all they can do for their communities. At FLAVORx, we couldn’t think of a better way to celebrate than to spotlight a few pharmacy professionals who go above and beyond for their patients. Throughout the month we’ll take a look at a day in the life of a few healthcare heroes and learn more about the diverse experiences of the hard-working people in the pharmacy industry.

To kick off the series, we spoke with Aimee Stuermer, pharmacist and co-owner of Medicine Man Bonners Ferry. Since Stuermer and her husband and fellow pharmacist Shane bought the pharmacy in 2015, they’ve worked hard to build a business that always places customers first.

Working in pharmacy has been a lifelong dream for Stuermer. She told us, “When I was a child, I loved to organize. I used to arrange my Skittles in a jar and stack them in a color-coordinated pattern. My mom attests that I used to say ‘Mom, I want to be a pharmacist so I can count and sort things!’” At the age of 17, Stuermer began making that dream a reality. She started working in the retail portion of a major chain pharmacy with the plan to move to the pharmacy department when she was old enough.

During pharmacy school, Stuermer met her husband Shane and the two were married before graduation. As they were getting ready to finish school, they had job options in both chain and independent pharmacy to choose from.

One option would take them to Nevada to work as pharmacists in the same major pharmacy chain where Stuermer had gotten her start. The other path would lead them to Bonners Ferry, Idaho where the owner of several Medicine Man pharmacies was opening a new location. He was looking for pharmacists to run the pharmacy with the intention of purchasing it down the road. The second option won, and the couple packed up, moved from Montana to Idaho, and began their new life as pharmacy owners.

Owner, Pharmacist, and Everything in Between

As both a pharmacist and co-owner, Stuermer works hard to keep many aspects of the pharmacy working as they should. Her childhood love of organization still holds true as she handles most of the pharmacy’s administrative tasks including paying bills, human resources, and payroll among many others. You can also find her working on the clinical aspects including non-sterile compounding and vaccinations. Besides these necessary day-to-day duties, Stuermer also works shifts on the front line as a verifying pharmacist.

Medicine Man Bonners Ferry is a small pharmacy made up of seven employees, including Aimee and Shane. Stuermer typically works between 40 and 50 hours a week, depending on other staff members' availability. Despite her busy schedule and long list of duties, she still manages to make taking care of customers her top priority.

As a pharmacy owner, Stuermer has made excellent customer service the norm at her pharmacy. She explained, “We strive to make sure all of our staff are friendly, great with names, and quick to help anyone that walks up. We like to greet our customers by their names and build relationships with them.” She is also proud that they have been able to implement a medication synchronization program at the pharmacy. This allows patients who take multiple prescriptions to sync them so that they can all be picked up at the same time, eliminating extra trips to the pharmacy.

Even a quick look at the pharmacy’s online feedback shows that Stuermer’s customer-first attitude has become the standard at her pharmacy. Words like “friendly” and “helpful” seem to jump out of every five-star review. Although Stuermer estimates she interacts with anywhere from 150 to 300 patients a day, she still manages to make every patient count. “Helping patients is definitely the most satisfying part of my job. I love being able to go above and beyond for my customers and to be a consistently friendly face they can expect whenever they visit.”