Kid-friendly medication flavoring system is now part of the curriculum in majority of schools of pharmacy in the United States. 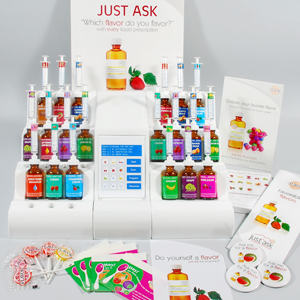 “We have students break into small groups and discuss mock scenarios where they might have to flavor, discuss flavor choices and discuss ideal flavor decision-making,” said Bob Shrewsbury, Associate Professor, Division of Pharmacy Practice and Experiential Education at the UNC Eshelman School of Pharmacy. “Many students also work in pharmacies that use FLAVORx and are able to share their experiences with the group. I believe it is a nice introduction from the education standpoint, to familiarize our students with medication flavoring and prepare them for real world scenarios.”

In addition to a thorough curriculum on the physiology of taste and taste masking, the schools receive a carbon copy of the medication flavoring system found in over 40,000 retail pharmacies today. This includes access to the company’s proprietary flavoring formulary, which provides the custom flavoring instructions for hundreds of different liquid medications.

FLAVORx first began donating their pediatric medication flavoring systems to pharmacy schools in August of 2010. Prior to this, the first exposure a new retail pharmacist had to pediatric medication flavoring typically came on the job. Recognizing there was an opportunity to provide these pharmacists with better training in the controlled environment of their pharmacy school, FLAVORx began reaching out to a few colleges to gauge their interest. Less than two years later, FLAVORx flavoring systems are currently used in 100 schools of pharmacy. The company has a goal of providing a flavoring system to every pharmacy school in the country by the end of 2012.

“Today’s pharmacy students are tomorrow’s healthcare leaders,” said Ursula Chizhik, Director of Pharmacy Programs at FLAVORx. “Through these donations, we are thrilled to know our country's future pharmacists will possess a better understanding of the value of medication flavoring to improve compliance and the important role they play in the process.”