Be Fearless with Ashley Klevens Hayes- Celebrating Women in Pharmacy 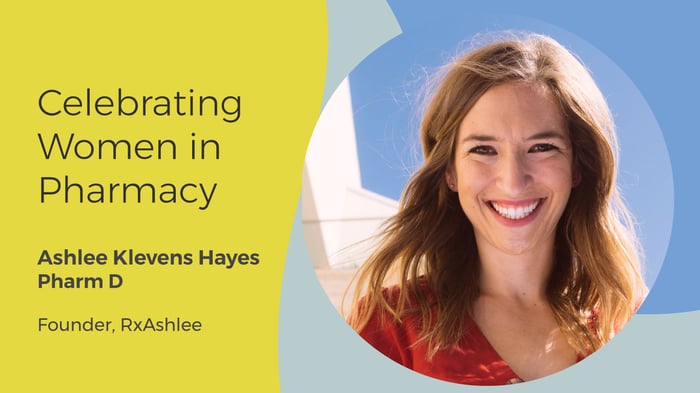 Ashlee Klevens Hayes’ journey in pharmacy has been anything but ordinary. Following in the footsteps of her dad and grandfather, Hayes grew up in the pharmacy industry and pursued pharmacy school always knowing she wanted to pursue a on non-traditional career path.

After becoming an Assistant Director of central pharmacy operations at a large academic medical center, Hayes took on a consulting position for companies building software systems for pharmacies. In this role, she was able to blend her pharmacy background to engage pharmacy leaders in the technology space.

This is where her profession took a unique turn because clinicians started to turn their heads, and notice that she was up to something different. Other pharmacists and her colleagues were very intrigued of how they could get into unique roles, such as the one she created for herself.

“I had pharmacists calling me and writing emails to me asking me how I got into the non-traditional pharmacy consulting space. So, I started traveling all over the country (and world!) talking to pharmacists, physicians, administrators, and professionals spanning all different industries about the work I was doing.” said Hayes.

This ultimately led to the creation and launch of RxAshlee, a career development boutique that focuses on supporting high level professionals in creating launching, and landing their dream jobs.

“Part of my business is to create a funnel for women and men to empower them to be fearless, do whatever they want to do and to lift others up along the way,” said Hayes.

What’s important to you?

Ashlee Klevens Hayes’ passion to help others in their profession furthered after witnessing countless colleagues and friends not get the jobs they deserved.

“I constantly asked myself ‘What is going on here?’ Why are my friends, colleagues, and family members not getting the jobs they deserve?”

Hayes started diving into the research and realized that these people (her close friends and family members) were simply underselling themselves & not clearly articulating their skills, strengths, and assets that they could bring into organizations. She realized that there was often a gap that some self-discovery could help to fill.

“I ask my clients the hard questions, like ‘what’s getting in the way, or what does success mean to you?’”

Ashlee believes that people should discover what’s important to them before defining success.

“I realized that it’s not just about developing simple leadership skills. It is beyond leadership, it is about figuring out what’s important to that individual person and that’s what we are missing in industry, pharmacy and companies,” said Hayes.

When asked what advice she has for women who are just entering the field of pharmacy, Hayes said, “We need to start acting like self-starters. Figuring out what your strengths and skills are and just going after it. Not taking a back seat. Taking the driver’s seat and steering your career to where you want it to be.”

Make it Worth it

We also asked Ashlee, what her greatest accomplishment has been thus far? She replied, “Every single day for the past 18 months I have woken up to people emailing me and telling me they’ve gotten the job they wanted because of my support. Every single time I see those emails and text messages it lights me up and it happens on the daily.”

Thank you, Ashlee, for helping to elevate not only women in pharmacy but people and professionals across industries.